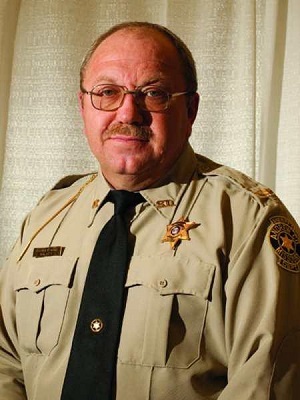 ST. JOSEPH, Mo. – A federal judge recently dismissed a widow's lawsuit against Andrew County and its sheriff after items were found missing from her home shortly after her husband died in 2014.

Kays found "no genuine issues as to any material facts" and that the defendants in the case "are entitled to judgment as a matter of law."

Atkins has been Andrew County's sheriff since 2009.

The case stems from Atkins' response a call to a St. Joseph home about the unattended death of Stephen Gabriel in July 2014, according to the background portion of the order. Atkins found members of Stephen Gabriel's family at the home, but his wife, Jane Gabriel, was not there.

Atkins eventually located Jane Gabriel and informed her of her husband's death.

"She told him she did not want the decedent's family at the house and asked if he would make sure they were not there," the order said. "If they were at the home, she directed him to kick them out. Plaintiff Atkins returned to the home but found it dark and locked up. He checked the home and found the front door, basement entrance door and basement garage door locked with no cars in the driveway."

Jane Gabriel subsequently reported items were missing from the home and that the locks had been changed, according to the order.

The prosecutor assigned to the case declined to pursue it, saying it was a civil matter, and Jane Gabriel's lawsuit soon followed. Her original lawsuit alleged eight claims, four of which were later dismissed.

Kays' most recent order was in response to a defense motion for summary judgment on the four remaining claims.

Jane Gabriel alleged that Atkins was negligent in securing her home, trespassed on her real property, converted her personal property and violated conducted an unreasonable search and seizure. She also alleges Andrew County is vicariously liable in Atkins' alleged action.

Atkins argued that even if he had been negligent, he has official immunity from Jane Gabriel's lawsuit.

Atkins acted discreetly during the call to the Gabriel home, Kays said in his order.

"Atkins exercised discretion in deciding who to talk to at the house when he arrived, asking questions and choosing what information was important to follow up on, determining who had a right to enter the house, locating Plaintiff to notify her, and in following up on her request to 'kick [decedent's family] out," the order said.

Gabriel, who claimed the sheriff was aware of animosity within the family, failed to establish that Atkins "had any dishonest purpose or ill will," the order said.

"That Atkins knew the decedent and his family is simply not enough," the order said. "Instead, (Gabriel) must point to specific evidence (to) support her allegations that Atkins acted in bad faith. She fails to do so."